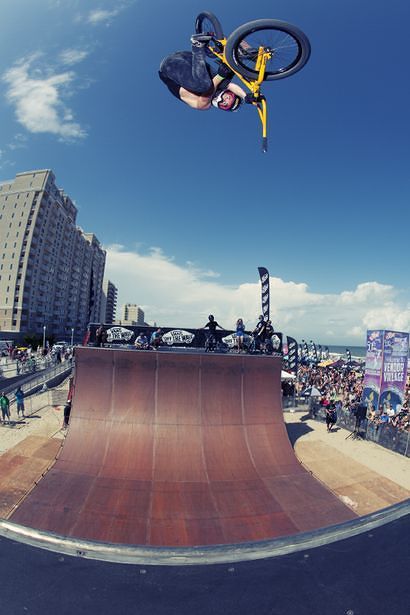 I was lucky enough to go to the Vans Contest in Virginia Beach that weekend.  I got to visit with a bunch of my friends and hang out during the contest.  It was a great time.  So many of my friends were there, and it was a great contest.  They had surfing, skateboarding and BMX.  So many of my friends were either competing or working the event.  It’s pretty close to Greenville, NC, which is where so many BMXers now live.  We got some good photos with the guys and me too!

It was exciting to head to the contest but there was some really bad news as well.  I was really crushed to hear the news that Brett Banasiewicz had crashed during practice for the Vans Contest.  Just the weekend before, Brett got 1st Place at the Dew Tour.  At the Virginia Beach practice for the Vans Contest, Brett took a serious crash and went down.  He had just missed the ramp by an inch or so.  He was rushed to the hospital with a serious head injury.  It’s really hard to hear a story like this because I know what it’s like.  I really hope he shows improvement and can make a full recovery from this tragic accident.  TO BRETT, AND HIS FAMILY:  STAY STRONG, FIGHT HARD.  I SINCERELY HOPE YOU PULL THROUGH THIS AND CAN GET BACK OUT ON YOUR BIKE SOON.

I got my very first pair of Vans shoes back in 1981.  That was a long time ago!!  Ever since I had my first pair, I’ve always had at least one new pair a year!  Over the years, that company has come a long way.  They still make great stuff but also have great employees, and a great list of team riders.  Thank you so much to Jerry Badders and everyone at the Vans Contest for showing me a great time!