It was a Friday morning, January 18, 2008, when I was riding my road bike to work.  I had started a part-time job at Hellen’s Bike Shop, just outside of Los Angeles, CA.  I had only worked there two days but enjoyed it.  I was riding from Silver Lake, where I lived, heading to Hellen’s…..it was at the intersection of Venice and LaCienega where my life, as I once knew it, changed forever.

I was riding in the bike lane…..the rest of the story is based on facts told to me by family and friends.  I was struck by a car, thrown thirty feet (and about ten feet in the air).  The driver stopped but she was the only witness.  Other drivers stopped after I landed on the pavement.  One of the drivers called 911.  At first, I was conscious but dazed.  The Paramedics said I was screaming about my bike (well, I had about $2500.00 in that bike!), which then resembled a pretzel.  I was taken by ambulance to Cedars-Sinai Medical Center, and my bike was taken to a nearby fire station.  Apparently, the police took my wallet and drove to my house in Silver Lake, trying to find family or friends.  They spoke to one of my roommates and a neighbor, who both headed to the hospital.  In the meantime, the hospital began treating me and found my cell phone.  A Social Worker at the hospital scrolled through my contact list and found “Mom” and called the number. 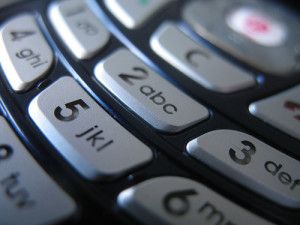 By this time, it was 2:20 PST (5:20 EST).  My mom lived on the East Coast, in Virginia, and she received the call on her cell phone.  She said she saw a California number on the screen and was puzzled.  She had just been upstairs on the computer, sending me an email asking how I liked my new part-time job.  She heard her cell phone ringing downstairs and ran to answer it.  That was a call that she said she hopes no one ever has to receive.

The voice on the other end was Lisa, a Social Worker at Cedars-Sinai Medical Center in Los Angeles, California.  As soon as she identified herself, my mother became hysterical and asked what had happened to me.  Lisa began to tell my mom what had happened, and about my severe injuries.  She indicated that my one roommate and neighbor were on their way to the hospital.  She also indicated that she would have the Neurosurgeon call her to give her more details of the injuries and treatment.

Within ten minutes of the first phone call, the Neurosurgeon contacted my mom.  In a nutshell, he explained that the injuries were severe and life-threatening.  He advised her that I had suffered severe traumatic brain injury, along with multiple fractures and bruising throughout my body.  Severe traumatic brain injury….. my mother used to work with children that had suffered brain injury so, of course, she freaked.  The doctor assured her that they were attempting to keep me stabilized, in a medically induced coma, and that the next twenty-four to forty-eight hours were the most critical.

Contacting a friend, my mom realized that she had missed the last flight out of Richmond, VA that night. The next earliest flight out was at 6:00 a.m. EST the next day, arriving in Los Angeles just before 11:00 a.m. PST.  In the meantime, she spoke to my friend/neighbor, Matt, and he offered to meet her at the airport the next morning.  During the night, and the next morning from the airport, she contacted the hospital staff who were nice enough to provide updates on my condition.  She arrived at the hospital around 11:30 a.m., where I was in I.C.U. in the medically induced coma.  The doctors informed her that surgery was too risky, so they would treat me clinically. 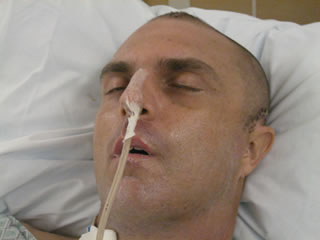 That day, January 18, 2008, changed my life forever.  I sustained severe traumatic brain injury, along with many other bodily injuries.  Originally, I was in a medically induced coma due to the swelling and bleeding of the brain.  Surgery was too risky so they were attempting to keep me stable.

On day five after the accident, I had been responding to verbal commands (ie. “thumbs up”, show “two fingers”) so they stopped the medically induced coma altogether.  I was even moved from I.C.U. to the Brain Trauma Unit at Cedars-Sinai Medical Center.  That evening, before being moved, I reached for my mother’s hand and said “You can fix me; you can fix me.”

As of Day 6, I was on a respirator, and hooked up to all kinds of equipment in the Brain Trauma Unit.  I was coherent though.  My mom said I looked up at the clock and told her the time!  My friend, Matt, came to visit and I told him I just wanted to “walk to 7-11 and get a f—— Gatorade!”  I had no idea what bad shape I was in!  The nurses let Matt get me a Vitamin Water and begin taking sips.  Then, they let me try to swallow some pudding (which was NOT Vegan!) to ensure I was able to swallow without difficulty.

At 12:00, they took me for a CT Brain Scan to assess the swelling and bleeding.  Transferring and transporting a brain injured patient is extremely traumatic.  My mom was allowed to go with me, watching the monitor and witnessing the huge bruising on the brain.  The swelling had gone down considerably, and the bleeding stopped though!  They got me back to the room by about 1:30 and I fell asleep.

At 3:00, they attempted to wake me to check my vitals and give me medications.  They could not wake me up!  I had slipped into a natural coma.  They issued a “code blue” but I was breathing, thanks to the respirator.  By now it was 4:00 and they rushed me for another CT Brain Scan.  This Scan showed elevated intracranial pressure and bleeding.  Remember, four hours earlier it had gone down!  There was no choice but to rush me into surgery.  That would be the first of two brain surgeries that night.  The first surgery, they relieved the pressure and inserted a Basil Monitor to continually assess the intracranial pressure.  After an hour in the recovery room, the intracranial pressure elevated to dangerous levels again.  They took me back to the operating room where they reopened the skull, this time leaving the bone flap (a four inch x three inch piece of skull) off and storing it in my abdomen, in sort of a pouch/pocket.  This would allow the brain to shift and reduce the intracranial pressure.  The doctors felt confident this was the only thing to do, but could not predict an outcome as I was in a coma.  The next forty-eight hours were most critical.  Would I live?  If so, would I be a vegetable?  No one knew. 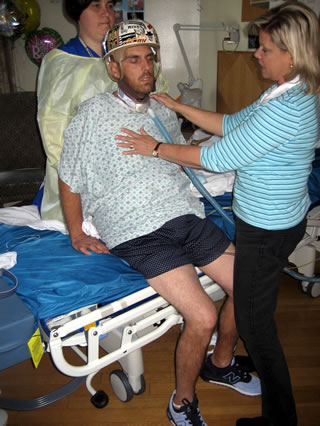 The days that followed were less than uneventful.  They determined that my left lung collapsed and was bleeding as a result of fractured ribs.  They had to do lung surgery.  While in the operating room, they did a tracheotomy as well.  A couple days later, they had to insert a g-tube (a feeding tube).  Then because I was laying motionless, they determined that I had several blood clots in my leg.  They had to insert an IVC filter to stop the clots from going to my lungs and heart.  Still in a coma, not knowing if I would ever wake up.

As time passed, I was in the “wake stages” of the coma.  That’s when a patient drifts in and out.  When I was coherent, the physical therapist and occupational therapist tried working with me.  I could tell the physical therapist that I wanted to walk to the door, or window, by pointing.  It took two people holding me up, taking baby steps, but I would eventually get where I wanted to be.  Sometimes I would drift back into the coma before we were done!

I recognized friends that came to visit, but would usually drift back into the coma in the midst of their visit.  How rude, right?!  One time I wanted paper and pen to write something down for a couple friends.  I wrote the date, time and place of an upcoming bike ride that I had helped organize!  Everyone was impressed.  Maybe, just maybe I was out of the woods and would make my way back, out of the coma, with little or no residual affects.  That, however, was not the case. 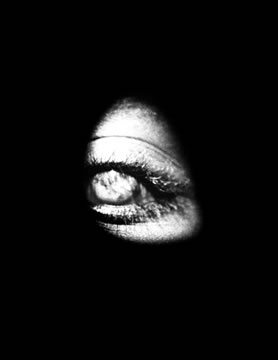 Less than two months after the accident, they were going to put the bone flap back into my skull as the intracranial pressure was finally within normal range. The surgery was called cranioplasty.  Two days after that surgery, another CT Brain Scan indicated excess fluid so I was rushed back to the operating room to have two drains inserted into the skull.  Once again, would I wake up?  Would I be a vegetable?

Three days later, the drains were removed.  Then the talk began about sending me to a rehab facility for traumatic brain injury.  Within a week after that last surgery, I was being transferred to Rancho Los Amigos Rehabilitation Center, in Downey, CA.  Still in the “wake stages” of the coma, it was determined that I had lost my eyesight.  The doctor at Rancho rudely told my mother that I was blind.  I didn’t know…..remember, I was still partially in a coma.

Blind in both eyes.  Devastating!  Later I learned that I had lost my sense of smell and taste as well.  I had surgery on one eye, as the doctors thought the retina was torn and detached.  In surgery, they determined the retina was healthy but they had to clean out blood from the vitreous as a result of the brain trauma.  There was hope that my eyesight would be restored and they could later do the same surgery on the other eye.  As I healed, there was no eyesight.  From time to time I could see dark images, but I couldn’t “see.”  No eyesight, no sense of smell or taste and then…..no memory of several years before the accident, which was diagnosed as amnesia from the brain trauma.

I later had surgery on the other eye, still hopeful that my vision would be restored.  Nothing!  Dark images from time to time but that’s all.  Fully out of the coma, now I am just a shell of the person that I was. 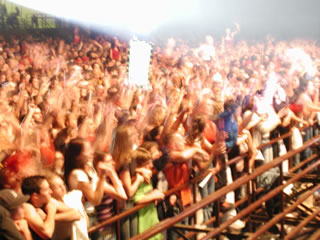 I was hospitalized for a total of six months, then went to out-patient therapy every day for four more months.  My mom rented a one room guest house in order to take me to therapy every day.  I have no memory of the accident, or the following six months.  I remember the very last few days in the rehab hospital though.  I remember that my friend, Olivia, was helping my mom find a place to rent and she took us to it.  After that, I recall pretty much everything.  I remember how good my friends were to me!  I especially remember Mat Hoffman coming to take me to the X-Games, as his guest.  I remember Catfish announcing that I was in the audience and I got a standing ovation as I waved to the crowd.  The crowd that I couldn’t see.  The events that I could only hear.

After ten months of hospitalization and therapy, I didn’t have a choice but to move to Virginia where my mom lived.  I hated leaving Los Angeles but I couldn’t take care of myself.  I was only a shell of the person that I used to be.  My life, as I once knew it, came to a crashing halt on January 18, 2008. 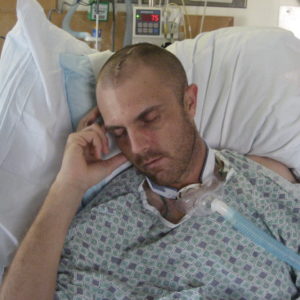 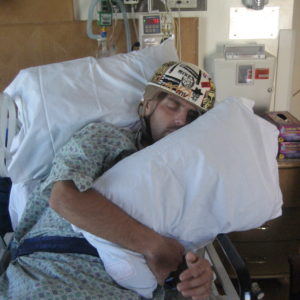 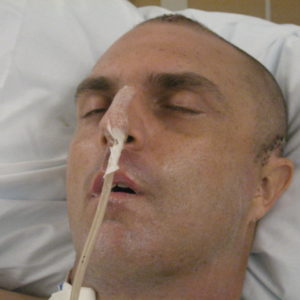 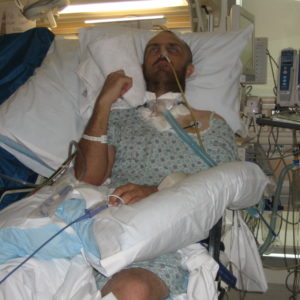 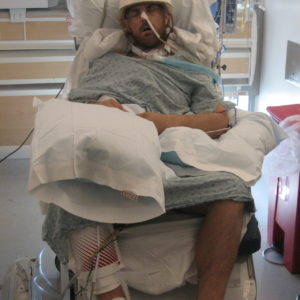 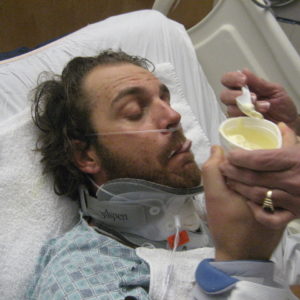 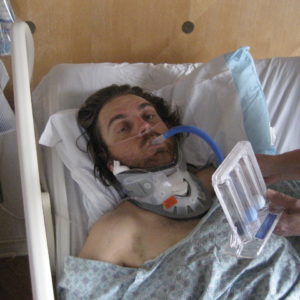 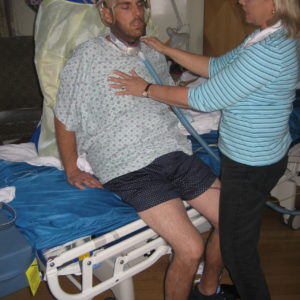